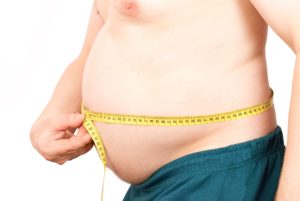 The American Medical Association defines obesity as a body mass index (BMI) of 30 or more, where individuals have too much body fat compared to lean body tissues like muscles. Obesity is often associated with serious health problems, including diabetes, cardiovascular problems and premature death. Obesity is also associated with an increased risk of many cancers (at least 13!), including esophageal, pancreatic, colorectal, breast, endometrial, renal/kidney, thyroid and others. It is for these reasons obesity prevention and treatment has become a major public health focus in the United States.

While diet and exercise remain the mainstays of obesity treatment, a number of surgical interventions have been developed to treat this disease. Bariatric surgery refers to a group of surgical procedures that permanently changes your stomach or small intestine to help you lose weight.  There are several approaches of this surgery available, including gastric cuff surgery, gastric bypass, gastric banding, and duodenal switch.

There are a number of benefits of weight loss surgery. Beyond a smaller waist line, bariatric surgery has led to decreases in blood pressure, normalization of blood sugars, and the discontinuation of multiple medications and pharmaceutical interventions as patients’ weight decreases. The effects on physical and mental health, especially in those who have struggled with obesity and its effects, are impressive.

According to a new Swedish study, losing weight can reduce the risk of melanoma skin cancer. Melanoma is one of the more common types of skin cancer that is considered more aggressive than basal cell carcinoma or squamous cell cancer with a greater propensity of  metastasize and through the body.

The study therefore demonstrated bariatric surgery was associated with and overall decreased risk of any skin cancer by 42%,  and 61% reduction in the risk of malignant melanoma development!

The American Cancer Society estimates that 91,270 new melanomas will be diagnosed in 2018 in the United States, and that ~9,320 are expected to die from it. This study suggests obesity could be considered a melanoma risk factor, and that weight loss in obese patients could reduce the risk of this cancer.

Ask your doctor what weight range is healthy for your height and body type.